raised just outside of NYC, began her training at Ridgefield Conservatory of Dance. She continued on to study at SUNY Purchase where she received her BFA in dance. Over the course of her training, she’s been given the opportunity to perform works of Lar Lubovich, alex|xan Median Movement, Robert Battle, Bill T. Jones, Lucca Signoretti, Anton Rudakov, Doug Varone, Michael James New York and Jonathan Riedel. She is currently the choreographic assistant and rehearsal director for Megan Bascom of Megan Bascom and Dancers. Jill also recently began working with Inclined Dance Project.  In the past, she was a founding member of the Big Evil collective and Michael J. Clark and Artists.

lives in Brooklyn where she dances and makes work for the stage, nightlife, musicians, and anyone else who will let her put on a show. A native Ohioan, she received a BFA in dance and choreography from the Ohio State University, taught and choreographed competitive studio dance, and performed with multiple modern and dance theatre companies. She currently makes work with her super talented friends via Crooked Mouth, performs with Inclined Dance Project, Fashion Week Noise, and the Mary Jo Camel Show. Amy is also a new member of this year’s Dance/NYC Junior Committee. She has previously performed and made work with several other artists in New York including Backspace Performance Ensemble, aemp:dance/Amiti Perry+Dancers, Kelly Donovan & Dancers, and Yula and the extended family among others. When not dancing she can be found tending bar, hiding in Bed Stuy, and trying to keep up with all the things.

Always having an interest in movement, Thomas Ciccone sought out dance lessons before entering college where he discovered that dancing was, in fact, his passion. His curiosity continued in college, where he received a BFA in Dance Performance and Choreography from The College at Brockport. Thomas traveled as a member of the Bill Evans Dance Company, performing at venues such as Jacobs Pillow Dance Festival and the Hochstein Theatre in Rochester NY.  Ciccone has also been a featured dancer in performance collaborations with The Rochester Philharmonic Orchestra which included Carousel in Concert. He has worked with Syracuse City Ballet as an Artist in Residency for the past 3 years setting work and performing with the company. Thomas is currently living in New York City where he has performed with Eddie Money in the Musical “Two Tickets to Paradise” as well as performing for Colombian musician Super Jem.  Thomas has been working with MB&D since May 2016 and is excited to see what’s ahead for the company.

originally hails from Evanston, Illinois. She has studied at Cornish College of the Arts in Seattle, Washington, and at Bard College in upstate New York, where she graduated with a BA in Dance under the tutelage of Maria Simpson, Aileen Passloff, and the Bill T. Jones / Arnie Zane Dance Company. Over the years, Natalie has performed work by and/or had the privilege of working with: Trisha Brown, Mark Haim, John Jasperse, Merce Cunningham, Markeith Wiley (The New Animals), Anna Lizette Conner, Trainor Dance, KK Apple, and Byan Strimpel. She looks forward to what New York has in store for her next.

a New England native, he began his formal dance education at Connecticut Concert Ballet under the direction of David and Wendy Lawrence. After a year of training, he was accepted to the Hartt School at the University of Hartford, founded by Peggy Lyman Hayes. During his time at the Hartt School,  he was fortunate to be taken under the wing by Katie Stevinson-Nollet, Stephen Pier, and Nina Watt to whom he attributes much of his growth. While at Hartt he performed works by José Limón, Martha Graham, George Balanchine, Vasili Vainonen, Shannon Gillen, and Pascal Rioult. Additionally, he was cast as a soloist in “Dark Meadow Suite,” restaged by Miki Orihara and Lyman Hayes at the Joyce Theatre in 2012. Upon graduating with his BFA, Sean moved to New York City where he joined the Mari Meade Dance Collective (MMDC). He has also worked with ChristinaNoel and the Creature, Erin Dillon and Dancers, Periapsis Music and Dance, Yoo and Dancers, Korhan Basaran, Project 44, Daniel Gwirtzman, and the Hoover Dam Collective. Most recently, he joined Megan Bascom & Dancers.

is a dance artist from Japan exploring cross-cultural understanding in the process of cognitive perspective. Fumihiro thrives on interdisciplinary work in a collaborative environment to creatively investigate innovative movement language. He was a member of Datura: a multidisciplinary improvisational performance group as well as CONDER/Dance in Arizona, and has presented his work at venues in California, Arizona, Colorado, and New York. As a choreographer, Fumihiro was a resident artist at [nueBOX] (2016) and a guest artist at California State University, Fresno (2016). He currently works with Megan Bascom & Dancers in New York City. In addition to being a dancer and a choreographer, Fumihiro has extensive experience in costume design and construction and lighting design. His unique perspectives and expertise allow his approach to be innovative yet complementary in nature. He has designed costumes, in a myriad of styles, for dancers and performance artists and his lighting designs symbiotically support the development of his own work as well as his collaborations. He holds his MFA in Dance from Arizona State University.

Louisville, KY native, grew up in the musical theatre and ballet community. In 2015 she received a BFA in Dance from the California Institute of the Arts. While in Los Angeles she danced for concert works, films and immersive theatre with Julie Bour, Sidra Bell, Natalie Metzinger, Rebecca Lemme and Anna Petrisko. Since moving to New York, she has had the pleasure of performing solo choreographic works at Triskelion Arts Center and WaxWorks, with Gaul+Moves in the Queensboro Dance Festival, and weekly at The House of Yes. As she continues to move and shake on stage and in music videos for, Kelsey is very excited to share the stage with Megan Bascom & Dancers.

is a multi-media dance maker, collaborator, and independent contractor based in Brooklyn, NY. As an artist straddling live performance and various media platforms, her work is influenced by her interests in storytelling, improvisation, and desire for play. She has performed and presented works at Boundless in Brooklyn, the 48-hour Film Contest, Triskelion Arts, AS220, Dance-Forms Productions International Choreographer’s Showcase (Guatemala), the South Eastern American College Dance Festival, and the Greenwood Dance Festival. Jessica has also been an invited Guest Artist at AC Flora High School and Hand Middle School in South Carolina, and at Kilgore College in Texas. Her interests have led her to work with choreographer and director Mary John Frank on her interactive dance-based show Debutant, and collaborate with Matthew Cumbie and Dance Exchange on a multi-year community engaged performance project about queer world-making and intergenerational collaboration. Skilled in production and arts administration, Jessica has held positions that range from dance to technology and the full spectrum in between. This includes work at Gibney Dance Center, the tech start-up TERP Corp., and working on the documentary United Skates. Jessica also worked in an administrative and advisory role for Megan Bascom & Dancers and continues to collaborate with founder and director Megan Bascom. Jessica holds an MFA in Dance from Texas Woman’s University, a BFA in Dance from Columbia College, SC and currently works as a Production Assistant for World Wrestling Entertainment (WWE).

is a Brooklyn-based roots musician and composer. In addition to his work for Megan Bascom & Dancers, he has worked with Quincy Jones, Bilal, and Miguel Atwood-Ferguson. He is currently the touring pianist for jazz artist Nikki Yanofsky and the keyboardist for indie rock group Art Decade. He recently finished several months of touring with Yanofsky, performing in venues such as LA’s Gibson Amphitheater, Montreal’s Bell Centre, and selling out Radio City Music Hall. Hawkins endorses Novation keyboards and MONO cases.

recently obtained her BFA in Dance Performance and Choreography from the University of Southern Mississippi, graduating with an additional minor in Costume Design. Before making the big move to New York, Kristen had the pleasure of designing and building costumes for several Southern Arena Theatre productions, including Dancing at Lughnasa, Fences, Anna in the Tropics, Arcadia, and The 39 Steps. She has (much to her excitement!) extended this passion to the dance field, designing costumes for her own choreographic work, as well as that by Cheryl Cornacchione, Jamie Fisher, the Marion Ballet Theatre, and the Hub Dance Collective. Since Kristen has been in New York, she has worked on dance costumes for Kelly Ferris Lester, Brynne Billingsley & Artists, and the Mari Meade Dance Collective. Kristen is very excited to be sharing this love with MB&D. 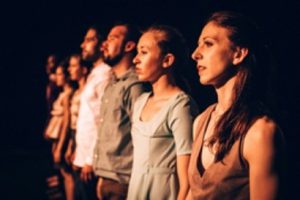 Your support helps keep us moving!